I'm delighted to announce that as of June 1st Kirsten Farrell has assumed the role of Director of The Goodman Center. I will remain actively involved as Director Emeritus (which, I believe, is Latin for "Are you still here?"), and I will continue to co-facilitate both our in-person workshops and virtual classes.

In her new role, Kirsten will take the lead in facilitating all of our online and in-person workshops, she'll develop new curriculum to keep our current classes fresh and relevant, and will also be adding new courses to our lineup. She will be the lead writer of The Goodman Center's new blog (coming soon) to share tools and guidance for public interest professionals and help them better connect with their audiences. You can read more about Kirsten on her bio.

Please join me in congratulating Kirsten on her new role, and thank you for your continued support and interest in everything The Goodman Center does to help do-gooders do better!

Give the People What They Want: A Story

Even if you have reams of evidence on your side, remember: numbers numb, jargon jars, and nobody ever marched on Washington because of a pie chart. If you want to connect with your audience, tell them a story.

If You Don’t Read this Issue Something Terrible Will Happen. And It’s All Your Fault.

Welcome to the world of public interest advertising, where too many messages work like this issue’s headline, relying on fear and shame to make the audience react.

In 1985, Herb Chao Gunther created a code of conduct for progressive activists. Fifteen years later, the guiding force behind Public Media Center revisits his original “Ten Principles,” and he still likes what he sees.

A Media Manual for Grassroots Activists

An Exhortation for a Cessation to Obfuscatory Peroration

Fed up reading reports, memoranda, and other documents whose meaning lies buried under a pile of jargon, acronyms, and buzzwords? Three people at the Edna McConnell Clark Foundation reached their breaking point earlier this year and decided to speak out. Plainly, of course.

Street Theater: The Art of Capturing Hearts and Minds

How do you interest people in an issue as complex as genetically engineered food? If you’re John Beske and Jim Slama, you begin by writing a play starring a nine-foot tall vegetable.

Heading towards the beach, mountains, or some other quiet getaway spot this summer? Here are a few good books to stimulate your thinking (preferably the free-range variety) and help you gear up for the next good fight.

Polls: Finding the Right Words in the Numbers

Facing an attempted repeal of a controversial “death with dignity” law, Oregon Right to Die polled voters on a range of issues. The results confirmed the group’s hunch: their primary message should not be about death with dignity.

Why Abstractions Are Obstructions

To make sure your audience will read your press releases and reports, be moved by your advertising, and respond to your invitations, keep your language specific, personal, and rooted in everyday concerns.

Taking the Measure of Measure C

Measure C would have raised money to widen highways in traffic-choked Sonoma County, but some area environmentalists saw serious flaws in the proposed tax hike. How did the enviros convince frustrated commuters to reject an initially popular measure? Step #1: they stopped talking about the environment. 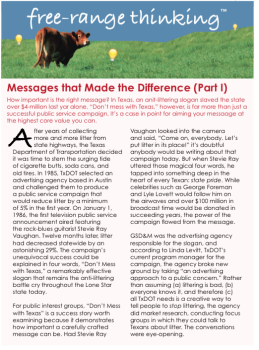 How important is the right message? In Texas, an anti-littering slogan saved the state over $4-million last year alone. Don’t Mess with Texas, however, is far more than just a successful public service campaign. It’s a case in point for aiming your message at the highest core value you can. (PDF format) 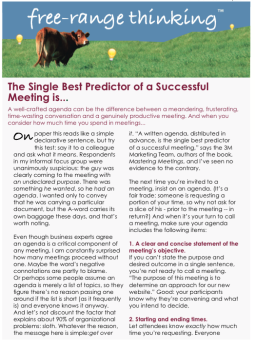 The Single Best Predictor of a Successful Meeting is….

A well-crafted agenda can be the difference between a meandering, frustrating, time-wasting conversation and a genuinely productive meeting. And when you consider how much time you spend in meetings.

“He came to the meeting with an agenda.” (PDF format)

Andy's work is more than a wonderful resource—it's that all-too-rare combination of rigorous education and unbridled entertainment.