In this newsletter article from November 2013, Goodman Center alum Celia Hoffman introduced our readers to the Rye Y Story Project.

Now entering its second year, “The Rye Y Story Project” offers a useful model for nonprofits that want to collect stories from their members.

Recognizing that stories are uniquely powerful communications tools is an important step for nonprofits, but it’s only a first step. Once organizations realize that stories can add a turbo boost to advocacy, fundraising, recruiting and more, they have to find ways to gather them – from staff, members, volunteers, donors, and others.

In 2012 the YMCA of Rye, New York launched a new project to capture stories from its members, and the response was so positive that the “The Rye Y Story Project” enters its second year this month. The challenges the Y encountered and solved along the way provide a helpful example for good causes that may be considering story collection efforts of their own. 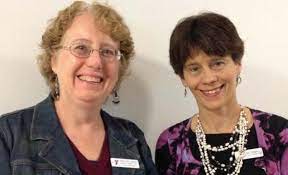 “We really struggled with finding stories and putting them together in a meaningful way,” Communications Director Lisa Tidball said during our telephone interview. She and her colleagues had attempted to solicit

member stories through videotaped group interviews, via a form on their website, and by asking staff to periodically gather them. But they had trouble creating a collection of stories that felt cohesive and really exemplified the depth of the Rye Y’s community.

When Denise Woodin was hired as Director of Community Outreach and Social Responsibility last year, she joined the team trying to solve this problem. A long-time fan of StoryCorps, the personal history-collecting project, Woodin thought the method of one-on-one, in- person interviewing might be the key to drawing out the members’ stories the Rye YMCA sought to uncover.

Woodin, Tidball and additional staff members formed a committee to create an event solely focused on story collection via one-on-one interviews. They ultimately decided to hold the event over a three-day period and to call it “Voices of the Community: The Rye Y Story Project.” A select group of staff members were asked to conduct the interviews and were briefly trained on interviewing techniques.

To prime the Y’s members for this first-time project, the committee used several tactics. Ten days prior to the event, details were posted on the Rye YMCA’s website, and as members passed the front desk they were handed a flyer detailing both when and why their stories would be collected. Additionally, Tidball interviewed several staff members and posted their stories at the front desk – each accompanied by a picture – to give members a better sense of what the project would entail.

Everything was in place for the event except one crucial aspect: where the interviews would be conducted. The committee wanted a location that would be highly visible but would also create a sense of privacy for the storytellers. A member of the maintenance staff suggested standing gym mats on their sides and bending them into three-sided compartments. Once a small table and two chairs were put inside the gym mat “story booths,” the project was ready to commence. 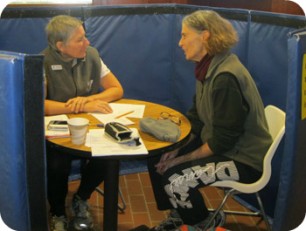 Though the event was cut short a day due to Hurricane Sandy, it was still a great success. “I was surprised how easy it was to interview people. Right away, members really opened up and talked earnestly about themselves,” Tidball said.

“They stepped into the booth because they wanted to tell their story,” Woodin added. (You can read some of the 27 stories that were collected here).

Ultimately, collecting the stories was only part of the Rye YMCA’s goal. The other part was sharing, and to do this, the committee set up an exhibit of stories and pictures throughout the halls of the facility. Viewing the stories as a collection helped people to fully appreciate the wide and continuing impact that the Rye YMCA has. “When we eventually exhibited the stories, people stopped and really read them. There was a buzz in the hallways. I think it really got people thinking about how special our community is,” Woodin said. “It helped our members form new connections with each other. After reading someone’s story, if you saw them in the hallway, you felt like you knew them a little bit better,” said Tidball.

As the Rye Y Story Project enters year two, Woodin and Tidball are excited both to collect and display more stories. “We could throw out statistics all day long, but it doesn’t mean the same thing as the intangibles–the person who ran their first triathlon as a member here, the senior citizens who find friendship here–and that’s conveyed through the stories,” Woodin concluded. “It’s as important for us to tell those stories as it is for us to hear them.”

Ten years later, you can read an update on this impressive story project here.

I was already comfortable at the front of a room, but in just a couple of hours, Andy helped me (and about 200 other trainees) think differently about the craft of presenting, and I know we walked away better presenters for it.